It’s Never Too Late to Support Someone

Sometimes a loved one or colleague experiences a death of someone close, an illness, a major life transition, or loss of a partner and we are too deep in our own lives to really take notice or be there for them. We feel guilty; we just were not able to really be there.

Then months later or even years later we surface from whatever occupied us and we feel embarrassed that we failed our loved one. We may tell ourselves, “I will be there next time.” Or we withdrawal from the relationship.

In this blog, I want to say that you can still support the friend through that same issue.

The following two examples, one from my personal life and the other through my academic research in post-conflict contexts and trauma, show the importance of being there now…whenever “now” may be.

The first involves a a friend who went through a double mastectomy last year. At the time I actually did not want to bother her; I figured she had many people taking care of her and I was buried in my research.

Instead of burying my embarrassment, I decided I would just be an amazing “aftermath friend.” I have learned from spending time with people who survived persecution or lost family to senseless persecution that the aftermath can be the worst.

I told her my plan and she said, “Thank you. Most people do not realize how difficult it is after the cancer even when you are in remission.” The experience was really difficult for her and changed the way she saw her life. Her children and husband were still struggling to emerge from that difficult period. So we talked about what life was life for her now.

Not many people paid attention to this phase of her recovery and I was able to step up and be there. 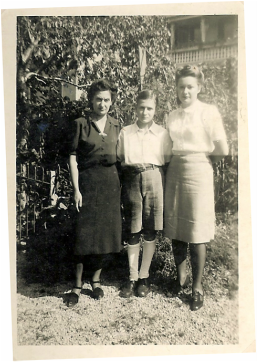 Then there are the atrocities that occurred either before we knew the person, overseas or even before we were born. Holocaust survivors, for example. I am not able to go back to the 1940s and help them during the persecutions or even in the immediate aftermath when many told me they starved and barely survived homeless and without work.

The assumption here might be that, “well, it happened before I was born. It’s too late for me to help.”

Not so. Many Holocaust survivors and likely survivors of other life traumas are isolated and alone with memories that resurface during their final years. People think that because they married, had successful careers, and children that they “made it.”

If you were open, you could be there for all kinds of people years after their actual suffering. Some of my most profound moments this past year have been with people who suffered long ago and said after our time together things like, “Wow, I haven’t told these stories to anyone. I wish you could stay; there is so much more to say.”

If someone came to mind as you read this, send an email or call them. When you reach them just say, “Hey, I know you went through a rough patch and I was not able to be there for you. I wanted to see how you are now and how you feel about what happened.”

Just be honest…they will be touched. And surprised!

Let me know how it goes…