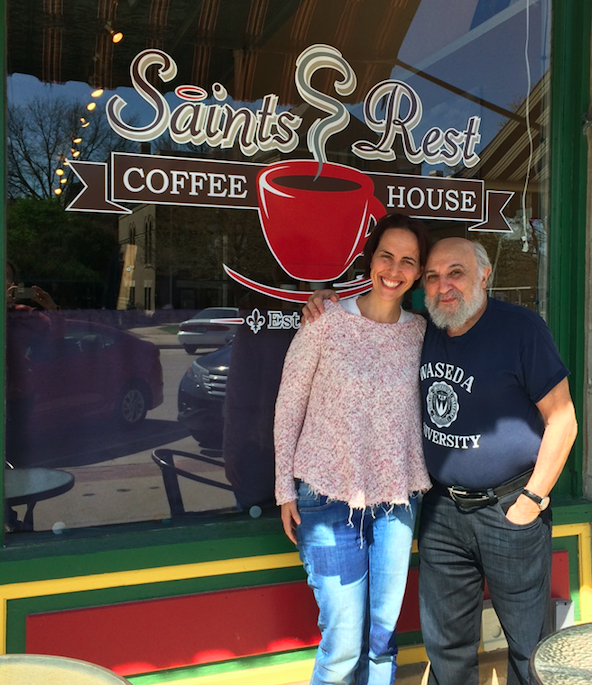 As part of my never eat alone series, this blog describes what happened Monday morning when emeritus religious studies professor, inter-faith dialogue specialist and Holocaust witness, Harold Kasimow came over to me in the café. We shared a morning coffee and some great conversation. Harold launched into his excitement about his new article in the Huffington Post  about the importance of “servant leadership” in today’s social and political climate.  In the article he talks about the importance of speaking up, as Martin Luther King Jr. encouraged us to do:

“His core message was that we must talk to each other and be fully present to each other. “[To] stand alone or live alone in the world today,” King said, “is sleeping through a revolution.””

King’s message and Kasimow’s message are aligned with the purpose of this never eat alone series.  I wish to inspire people to talk to each other, both the upend the alienation that brings anxiety and depression as well as to strengthen the links which strengthen our communities, nation and world.

Harold and I chatted about his article and then he told me a bit about his Holocaust story . Harold spent a few of his early years hidden in a cellar. He did not know what light was when he first saw it.  His father built a tunnel so he could slip out for food: mostly bread and water.

“That’s why I’m so short,” he told me. In his early years he barely age, “All of the Kasimows are really tall. Except me!”

The Long-Tail of Holocaust Survivorship

For many years, Harold did not think of himself as a survivor until his sister wrote a book about his family’s experience.

“But it was really about 50 years later that it started affecting me,” he explained.

Harold was a professor of religious studies at Grinnell College starting in 1972. I met a man who took Harold’s class back in the 1980s and said,

“It was incredible, Harold taught this whole class about Jews in Poland during the war and never once mentioned that he was one of those Jews.”

This is not uncommon. In the 80 interviews I conducted with Holocaust survivors for my forthcoming book on the contemporary U.S.-based conflict over role of the French National Railways (SNCF) in the Holocaust, I discovered that many lived decades before what happened really hit them.

“Of course I was a mess before then, but it was at about 50-60 years when it really started to affect me…dreams, memories. And I started telling my story. But it was really hard. I started to have dreams. ”

He then stopped telling his story for sometime.

“It was just to difficult,” he explained.

“I have started again. Now that Elie Wiesel and many of the others are gone, I feel an obligation.”

Like many witnesses of the Holocaust I have met, Harold doesn’t concern himself only with the horrors of the Holocaust. He focuses on contemporary challenges; he spends much of his time working on interfaith dialogue, When I asked him if this work was influenced by his early experience he said,

“Yes, but I didn’t realize it for many years.”

I asked whether he was ever involved in the lawsuits, trials against former Nazis or restitution. He said he has never received any money. He thinks he made too much money today and was therefore disqualified. Do certain compensation programs limit based on your income? How could that be? How could an apology be dependent upon your current well-being?

That’s like having an old boyfriend not apologize because you’re now happily married. One has nothing to do with the other. I seemed more bothered by it than Harold. He moved quickly to discussing the relatively new compensation program which offers 2500 Euros to anyone who survived. He filled out the paperwork, but there is some discrepancy between his story and their official story,

“How am I supposed to remember exactly where we were? How are we supposed to have records of this?”

His comment echoes the frustrations of many survivors of the Holocaust — some of the few survivors of mass atrocity who are even eligible for compensation. Most of the world’s genocide survivors have received nothing — and likely never will.

In 2005, Keith Ferrazzi came out with a business book called Never Eat Alone: And Other Secrets to Success One Relationship at a Time.  Now in its second edition, Ferrazzi discusses importance of relationships for professional advancement.

The book sparked an idea!

What would happen if I started to avoid eating alone?
What kinds of incredible conversations might I have?

The purpose of this series is to record these rich conversations and inspire others to eat with others. See where these conversations take you. I would love to hear your stories, so please add them in the comments below!