Guns Aren’t Just In Schools, They’re In Your Bananas 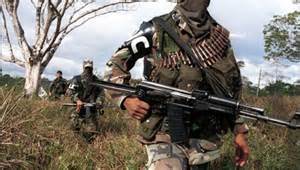 Many of us have been worried about the amount of guns moving about the United States. There are more guns than people at this point. It’s amazing we don’t stumble on them on the way to work.

Even though I study corporate accountability for mass atrocity, I did not know until today, however, that our delicious bananas are part of a gun problem.

In 2001, court documents showed that Chiquita banana (whose bananas I enjoy daily) bought 3,000 AK 47s and 5 millions rounds of ammunition from Nicaragua.

I guess it has been, “Bananas for Bullets.”

And the company does not just have its hold on bananas. It’s one of the largest food distributors in the world with annual revenues around $4.5 billion. So, a few million bullets would hardly seem prohibitively expensive.

Who are the bullets for?

The company has been in operation in Colombia since 1899 and has had been deemed complicit in the murder and torture of townspeople as early as 1927 and as recently as 2001. The company has paid off FARC and other warring factions and still seems up to all kinds of shenanigans.

The U.S. State Department took the company to task in 2001, but the results disappoint.

While Cincinnati-based Chiquita Brands International, Inc. paid $25 million in fines for some naughty behavior, most of that money went right to the U.S. Justice Department and NOT to the Colombians. You see, Colombians cannot be represented in U.S. Courts. Complicated.

I think you might agree that the whole thing sounds bananas.