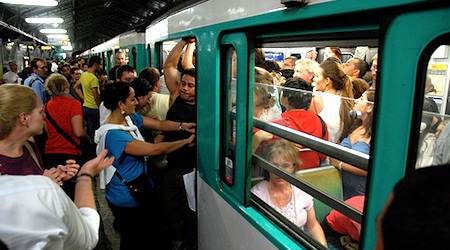 No one can deny that Paris is filled with many joys. Paris is also the birthplace of existentialism for a reason. When it rains, is cold, crowded and cranky, Paris can suck delight away as quickly as it gave it over.

Tragic Paris in the Rain

Yesterday offered unseasonably cold day of rain. The weather offered a perfect, if unpleasant, context in which to spend the day with a Holocaust survivor visiting Drancy, France’s largest internment camp in a suburb just outside of Paris. She took me and a couple friend around the site, told us how the camp — now immigrant housing — held 100,000 mostly Jewish deportees while they awaited their trains to Auschwitz. She also talked about her regular post-war visits to the site to see if her mother was among the returning survivors. “For years, I thought she may have had amnesia and been living somewhere.” The government just labeled her mother as “disappeared.” Only in the 1990s was she able to acquire a death certificate. 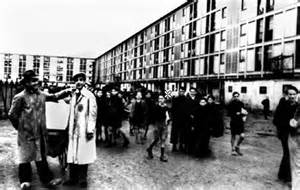 Even though we did our best to bring some humor and levity to the day, the rain and tragedies of WWII loomed heavy. After the visit, I met a friend for an aperitif at the Paris-London brasserie where discussed the Greece’s looming debt crisis–the modern economic war in Europe.

When I learned that my 8pm dinner plans would take me on another two trains — I had already ridden several to reach the camp– and more traipsing through the cold rain I struggled to find the whimsical joy I had experienced during Paris’ fête de la musique that occurred the night before.

On the crammed metro, people looked tired, irritable and wet. I was just about to add my own fatigue and bedraggled state to the sorry looking lot when something shifted in me.

So I closed my eyes and just focused on feeling happy and excited for no particular reason.

The sound of a crying infant lurched me out of my isolated zen moment. I looked at this adorable, cranky 1-year-old and decided that we would have a good time. My focus became cheering him up. I started making faces at him and then he at me. His mother, also tired and irritable at first tried to quell his every move. Once he started reaching out for me I told her he seemed to be kind of a flirt– a drageur. Then she laughed and softened too. She also began to play with her son instead of whacking his hand away from his face.

We all three started having a good time. He started trying to explain something in his not-yet-quite-a-language and I listened with attention, agreed with him and used hand motions to encourage further clarification.

Together we did not cheer up the whole metro we only the ride transformed for us. Instead of following what I affectionately named during my years in Paris, “the Paris Crank” (caused by cold, fatigue, crowded metros and a sour attitude) we chose joy.

Maybe I gained perspective from my research– no train ride could really be worse than those cattle cars to Poland. Even more simply, joy is more fun than being cranky. I was able to catch my mood and the child’s discontent early enough enjoy to turn our emotional train around. On the one hand, this was just 7 minutes on the other hand, life really is just an accumulation of moments, so why not make the best of each one?