Saints Rest: One of the Last Great American Cafes? 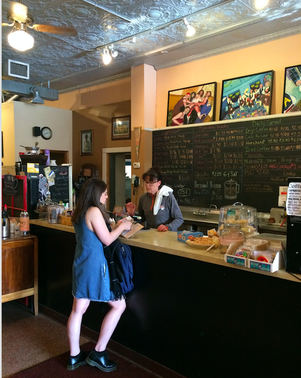 When I read Ray Oldenburg’s ethnography; The Great Good Place: Cafes, Coffee Shops, Bookstores, Bars Hair Salons, and Other Hangouts at the Heart of the Community, he seemed to be writing about a place already extinct.

I have lived in Paris, so I know the café culture there and have sought for years the “ideal” American cafe where people come together to exchange life updates as well as ideas. A cafe where people work on their projects while remembering that our borders are permeable. We are individual creatures operating in community. But we are community creatures that take on individual projects.

One of the Great Cafés! 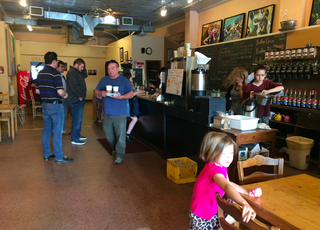 Well, it turns out such a café does still exist. At least one remains. I am writing this blog from SAINTS REST: COFFEE HOUSE right in the heart of Grinnell, Iowa. This morning two moms have their kids running around looking for leftover Easter Eggs. In the corner, Jon, the anthropologist is chatting with Howard the emeritus religious studies professor who survived the Holocaust by spending two years in a potato cellar. One woman in a black polka dotted dressed seems to be preparing for an interview and others grab their coffee to go.

“Sarah, do you want the awning down,” Sam, the owner, just called to me.

​She had noticed the sun beating on my back. Abbey, roughly aged four, just bumped her knee during her café hunt for Easter eggs. Once she finished with the awning, Sam came over to kiss the boo-boo. 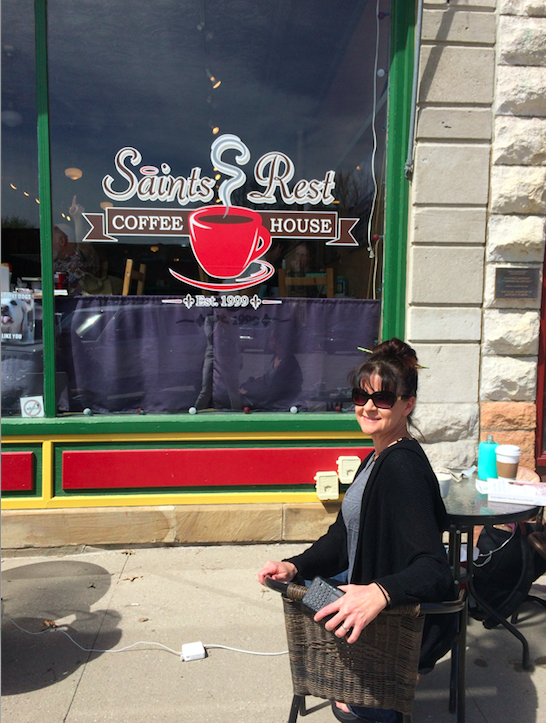 That’s just Monday morning. You should see this place on the weekends. The above photo is of Sam, the owner. She came and had a coffee with me outside yesterday. That’s how she knows my name. She said bought the café just a few years ago and hopes when she sells it in 20 years someone else wants to keep the spirit alive.

“I’m never sure whether to stay open on Easter, ” she explained, “but the students tend to come out when the weather is warm like this.”

But people came by after church, Grinnell College students struggled to finish assignments due Monday as I made my way through book three of Elena Ferrante’s Neapolitan novels.

As wonderful as yesterday was, last weekend may have even been more extraordinary. Rabbi Rob, the school’s Rabbi who helps run the spirituality and social justice center would not let me sit alone reading. He wanted to introduce me to some of the incredible people sitting all around me.

This included Kesho Scott, a professor in the sociology department who used to be a black panther and had heard Martin Luther King speak. She is internationally recognized for her human rights and other workshops designed to shorten the divide between people, mostly by helping them unlearn racism. (A perfect person to meet before I start leading similar classes at the University of Baltimore this fall.) Students and faculty came up to her all afternoon wanting to bounce ideas off her or tell her their latest accomplishments.

She never graded her 16 student papers.

It’s not only intellectuals who stop into Saints Rest. The café draws locals who pull up in large trucks. Sam, herself is from Louisiana, and gives the place a southern feel. A large apple pie was at the counter at 7am this morning. You know, just in case you had a hankering. She taught me about “ham balls” a southern meal that she and her family make all the time.

Saints Rest is intellectual and social justice oriented while leaving space for the Iowans who come by for a cup of joe in the morning. 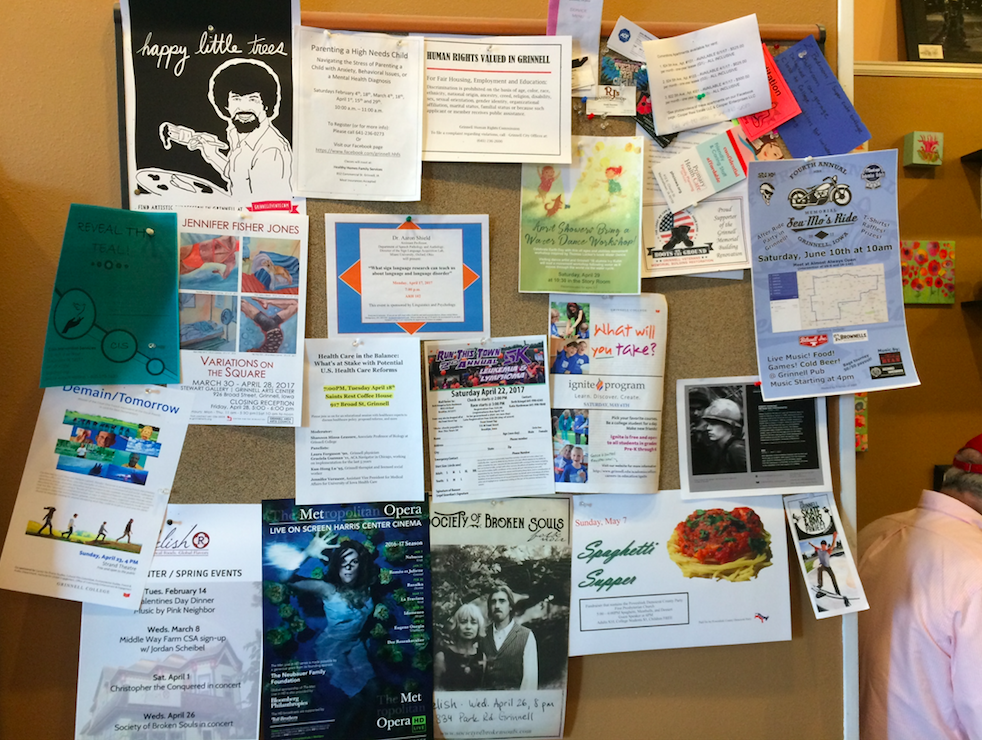 All Great Places Have Conflict

The café is an intersection of multiple worlds and sometimes those worlds collide A Grinnell student told me just after I left last Sunday, he had a run-in with a local man. The student was having an animated conversation with a friend in which he was using numerous curse words. A local man told him stop speaking with such a fowl mouth. The student believed the criticism also had to do with the fact that he was gay. Though, I’m not sure how the man would have known that.

​Somehow the police became involved. A little drama to keep the streets alive, I guess. Where there are people there is conflict.

All in all, I have to say Saints Rest Coffee House is magic. Anyone who lives in our around suburban sprawl knows how rare these places are. Usually you find cafés in U.S. cities inhabited by young folks without kids. But at Saints Rest, you find a place for ages 1-100. And as compared to most city cafés people seem to talk to each other, at least more often.

Thanks, Sam for making residents of Grinnell Iowa think this way of life is normal and thanks for letting me know the American café is not dead. I’ll have to tell Ray.