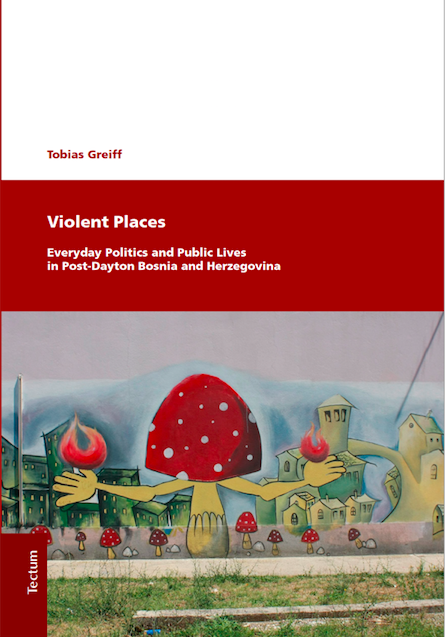 I first met Tobias while he had a research position at the School for Conflict Analysis and Resolution at George Mason University. He moved around the halls carrying a white mug that said, “war crimes.”

When you held this mug with your right hand you saw nothing else, no explanation, just the black letters “war crimes.” And these crimes were clearly always on Tobias’ mind.

Sipping from his cup, he talked to me about his research, deep exploration of positioning theory and his non-profit organization in Bosnia which has long-helped orphans. When he invited me to give this talk, I was eager to see what became of all his ideas and experience.

What struck me first as a non-expert in the Balkans, was hearing about the growing insecurity. I like many, thought of Bosnia as a place safely classified a “post-conflict” region. In the past 20 years, however, the exclusion, repulsion and open aggression towards Bosnians has continued largely invisible to the international community.

Post-war Bosnia is not okay.

Some places face up to 50% unemployment. Many lack money for basic needs, with the older folks facing tremendous vulnerability.

Tobias raises the critical question; how did all that investment in post-war Bosnia not build the resilience needed to resist and prevent some of the exclusionary tendencies and new moves towards radicalism?

He holds us, by “us’ I mean the post-conflict and development community as partly at fault. He says perhaps we have misunderstood what being Bosniack, Croate, Serbian means to people today in daily life.

We must seek to understand this. We must also restory the Balkans as the “powder keg” of Europe while simultaneously restorying post-war Bosnia as a success story.

Only by taking off our rose-colored glasses can we see the on-going tensions. Only through clear vision, can we help increase trust. Trust creates stable relations which in turn attract investment. Investment can help local populations resist pressures to radicalize.

Pressures continue from Turkey and Saudi Arabia which seem to be engaging in a kind of proxy war through this shattered society. Improvised people are increasingly vulnerable.

Such precarity prompts us to ask, is the war over? Is this a negative peace? The society seems to have all the indicators of heading towards future outbreaks or at least oppression.

To help us see the present-day situation with clear vision, Tobias pushes us to let go of the hope of e pluribus unam by considering the many within the “one.” And this many means more than ethnic groups. He makes a convincing case that ethnic divisions have camouflaged other differences perhaps equally as important.

Through research collected on 6 visits over 5 years, the book takes us on a tour of four cities, Gorazade, Mostar, Banja Luka and Sarajevo. We travel along rivers, dirt roads, and nicely paved toll roads for the “rich” which transition us from one community to another. Pastoral landscapes constantly being disrupted by the ravages of war.

As someone who writes about how we label and conceptualize perpetrators, I appreciated Tobias’ acknowledgement of some Serbian perspectives. In seeking the marginalized victim, we can too often and easily silence the “perpetrators.” When our own work marginalizes those deemed “perpetrators”, we contribute to dynamics of exclusion and perpetuate cycles of violence.

Instead this book keeps multiple parties visible highlighting both who and what is present and what & who is absent in public spaces. Perpetrators and victims , he says, first linked through violence are now linked by remembrance.

We see the remnants of war and unresolved trauma in street names, flags, burial grounds, bazars, graffiti, memorials, university catalogues as well as the presence/absence of religious buildings.

Tobias Greiff is clearly an expert on the region and convinced me that we need to look at Bosnia again, with new eyes. In the face of so many violent conflicts already in full eruption we can miss those starting to bubble at the surface.

Book introduction given by Sarah Federman at the Institute for European, Russian and Eurasian Studies at George Washington University, Tuesday October 23, 2018.